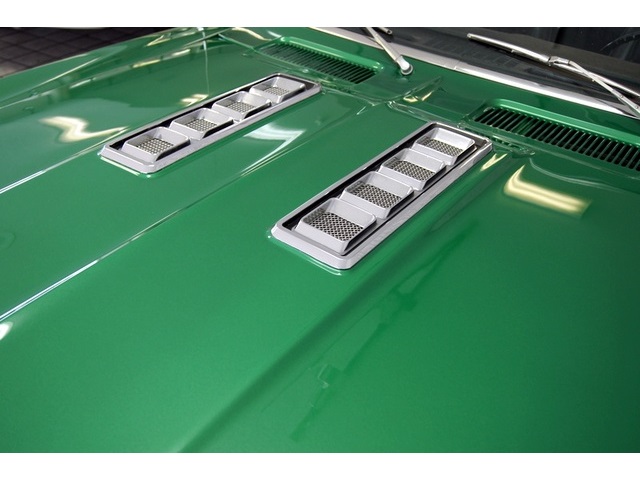 Thank you for allowing me to inspect this vehicle for you. I inspected the car at the seller’s dealership today. I also interviewed the dealership buyer to determine what he knew about the car. Documentation from the previous owner is included with the vehicle and attests to the restoration efforts. I will discuss those below.

The dealership buyer actually bought the car in Chicago from a collector who is liquidating his collection. He has several other vehicles that the dealership is interested in. I was able to determine the seller’s name, which is included in this report. I discovered that the car was originally an Ohio car, taken to California where it spent several years, and then brought back to Illinois. The buyer believes the person whom he bought the car from in Illinois is the same person who owned the car in California. The documentation confirmed that he is correct.

The body tag number is the primary source of authenticating this GM vehicle. The body tag on the car is evidence of the original year of production, trim color, exterior color, model, and [in some cases] engine size. It also tells where the car was assembled and the production sequence, which lets us identify the date of production.

The serial number posted on the dash, near the windshield on the driver’s side, is 123456789123. The sixth digit stands for the year of production, in this case 1969. The last six digits represent the actual serial number within the production sequence for the production year. Through this number, I was able to date the production month/year of the vehicle. All 1969 Camaro serial numbers started at 500,000. So this car was the X’th Camaro produced for the 1969 model year. It was produced in February of 1969.

On the body tag, the 51 EPNT code stands for Dusk Blue. The car has been repainted and I believe the current color to be GM “51” Dusk Blue. The buyer agreed and felt the same way when he initially bought the car. The X22 on the body tag stands for SS 396, which designates the motor that was installed in the vehicle at the Norwood, Ohio, assembly plant. The sequence of numbers on both the body tag and VIN plate verify that this car is a legitimate SS 396 equipped vehicle.

The transmission tag that is bolted to the transmission pan is stamped XX 12345-M20. I referenced that number in the Illustrated Camaro Recognition Guide, Vol.1, and it denotes year, production number, and gear ratio numbers that you might need in the event you ever want to replace gears in the transmission. It is an M20, Muncie transmission, so I would suggest that the tag remain on the transmission. The advertised ratios for this transmission are as follows: 1st -2.52, 2 nd-1.88, 3 rd-1.46, 4 th 1.00 and reverse 2.59.

Interior : The mileage on the odometer is 23,123. All parties agreed that the odometer has turned over, therefore making the mileage at least 123,123. Although I am unable to find any documentation confirming a rebuilt engine, I would assume, given the history of wear and tear on GM big blocks and the high mileage, that the motor has been rebuilt at some point in its life. I would suggest that you request a cylinder pressure test from the seller, which is quite easy to perform.

All of the gauges work except the tachometer. I would suggest that you have the dealership repair the tachometer. Given the value of this vehicle, there is no reason that the car should not be delivered in pristine condition.

Exterior: The paint is in good condition but the car has obviously been repainted. The painter did an excellent job as there is no indication of body or rust repair.

According to the seller, the front spoiler was damaged in shipment. The spoiler is cracked in the center at the mounting brace. Since these are now produced in the Camaro aftermarket, I suggest that you request a discount on the car price, equal to the cost of the spoiler.

The rally wheels and the chrome and bright work are in great condition. The head lamp and tail lamp bezels are in excellent condition. The heater and the air conditioning work fine. The panel spacing between doors-fenders-hood and deck lid are uniform throughout. The inner fender edges and wheelhouses are sharp and show no signs of repair of body work.

Trunk: The trunk floor has been re-spackled in gray paint. The floor shows no signs of rust and there is a new liner. The spare tire is an exact match to the four on the car and is brand new. The rally wheel is also an exact match. The hinges are solid and are also refinished. There appears to have been a lot of time spent in restoring the trunk.

Engine Bay: The detailing of the car by the seller was done to help make the car more presentable. However, the body tag was painted over in black when the firewall was painted and the engine block codes on the right front corner of the engine block have been painted GM orange, hiding the engine codes. I used paint thinner to clean the surface so I could read the codes. I caused that imperfection, but I suggested that the seller leave that area unpainted so that you can verify the codes yourself. The seller advised me that he had replaced the engine compartment decals.

The engine code, as shown in the photographs that I sent you, confirm that this is a big block and was so produced at the factory. The last six numbers on the engine are the same as the VIN number. Therefore, this would be classified as a numbers-matching vehicle.

Undercarriage: When I inspected the car, there were no oil spots on the floor beneath it. When I placed the car on the service rack, there were no signs of leakage at the engine, transmission, or rear end/third member.

The undercarriage is and has been restored. It is clean, and painted accordingly. I am told by the seller that he purchased the car in that condition. There are no signs of rust or repair on the front frame section, body rails, or unitized sections. The floors are solid and do not appear to have been replaced. The shocks are newer and the front suspension has been recently rebuilt. The brake and gas lines are newer and the inner wheelhouses are painted black and show no signs of repair. The serial number on the transmission is XXXXXXX and the patent number is 3088336. The bell housing serial number is 3858403. The engine is painted in GM orange and the transmission is unpainted. The engine is stamped “Hi-Perf” on the lower driver’s side of the motor.

Driving Test: At the time of my inspection the car was on the seller’s showroom and I was allowed to remove the car and drive it around the immediate area. There were no signs or sounds of metal-to-metal rubbing or suspension problems. The brakes did not rub and the turning was full-range-of-motion. The shocks seem to carry the weight evenly and had good rebound. The alignment is good with only a slight pull to the left after about 100’.

The acceleration is strong. I was able to get through all the gears and the pull was exceptional. The transmission shifts without problem or noise and the clutch engages about half way up. The sound of the exhaust is impressive and is immediately reminiscent of a big block sound.

Opinion: In my opinion the car is as advertised.   The vehicle has all of the correct numbers on the body tag, engine, and VIN number plate, indicating that the car is an RS SS 396, V8, Dusk Blue coupe. While I do not authenticate engine blocks as a norm, this car certainly appears to be an original numbers-matching vehicle and not a clone. I find no evidence of engine replacement, and the original cutaways and drilled holes in the fire wall are original in everyway.

I hope this letter of inspection helps you and gives you some comfort level in your dealings on this car.

Should you have any questions in regard to this submission, please don’t hesitate to contact me.